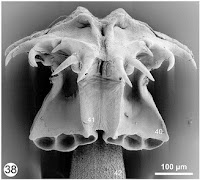 My colleagues Janine Caira and Kirsten Jensen travel around the world collecting tapeworms that live in sharks and skates - their specialty. The diversity of cestodes in these marine creatures is enormous and these two scientists have discovered and described dozens. In a recent paper, they presented a whole new genus of tapeworms from whaler sharks and described five new species. One of my favorites of the pack is Triloculatum geeceearelensis, a species that they found in the finetooth shark, Carcharhinus isodon in the Gulf of Mexico. They named this species after the Gulf Coast Research Laboratory, or "GCRL" to thank the facility for hosting them while they did their work. Sound out the species name and this will make sense! The image is a scanning electron micrograph of the scolex of the tapeworm - the "head" bit that it uses to attach to its host's intestine.
Posted by Susan Perkins at 11:21 AM