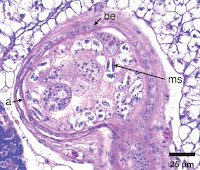 Reference: Sears, B.F., P. Anderson, and E.C. Greiner. 2011. A new species of myxosporean (Sphaeromyxidae), a parasite of lined seahorses, Hippocampus erectus, from the Gulf of Mexico. Journal of Parasitology 97:713-716.
Posted by Susan Perkins at 2:53 PM