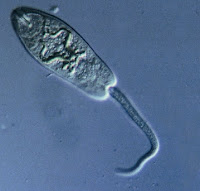 This is a story about two little crustaceans and a parasitic fluke. Corophium volutator and Corophium arenarium are amphipods that make a living tunneling in the mudflats on the coast of the Danish Wadden Sea. They are also host to many species of parasitic flukes, and one of them is the parasite we are featuring today - Maritrema subdolum. Last year, we featured a related species from New Zealand - M. novaezealandensis - and much like its Kiwi cousin, M. subdolum is the bane of the local crustacean population. However, M. subdolum does not affect all of its crustacean hosts equally and this has some important ecological consequences.
Out on the Danish mudflats, C. volutator is king. Of the two Corophium species, it is the stronger competitor, reaching much higher abundances and generally making life difficult for C. arenarium. But along comes M. subdolum, which evens out the playing field. Living alongside those little crustaceans are mud snails, and during early spring they can become extremely abundant, with over 25000 snails per square metre. By summer, almost half of those snails are infected with M. subdolum, which turn them into little parasite factories, each cloning a massive reserve of parasite larval stages call cercariae that are then unleashed into the environment to infect the amphipods. The main trigger for releasing these cercariae is high temperature, and during 1990 there was a bout of unusually high temperature during summer that has been linked to North Atlantic Oscillation (NAO), a phenomenon that plays a major role in determining climatic conditions in the northern hemisphere.
All of this combined into a perfect storm that devastated the C. volutator population. Triggered by high temperature, all the infected snails released their payload of parasites into the surrounding waters. Each infected snail can release hundreds of cercariae, and with thousands of snails per square metre, the shallow waters of the mudflats turned into a seething parasite soup. To the amphipod, this amounted to being in a shooting range, as each cercaria is armed with glands of digestive enzymes and a scalpel-like organ call a stylet with that they use to puncture the amphipod's exoskeleton. For many C. volutator, the outcome of being attacked by a swarm of these little horrors was terminal, and this resulted in a dramatic decline in their population. However, for some reason we still don't know, the C. arenarium population was able to weather the M. subdolum storm unscathed, either because they tolerated the parasite swarm, or because they were simply not the preferred target. Either way, with the collapse of the C. volutator population, in the next season, C. arenarium was able to succeed them and become the dominant amphipod species on the Danish mudflat.
And this dramatic ecological change was ultimately brought about by a little parasite.
Photo by Kim Mouritsen
Reference:
Larsen, M.H., Jensen, K.T. and Mouritsen, K.M. (2011) Climate influences parasite-mediated competitive release. Parasitology 138: 1436-1441
Posted by Tommy Leung at 9:19 PM