Special Report: #ASP2012 (Australia) Part I: Better the Devil you (get to) know

This post is the first in a series of special reports that I will be writing based on my recent experience at the Australian Society of Parasitology conference in Launceston, Tasmania (some of you might have noticed my tweets from the event tagged with #ASP2012). As a disclaimer, I will only be writing about the talks and posters which I personally saw, thus they will be those which reflect my interest in natural history, evolutionary biology, ecology, and wildlife diseases. Those also happens to be the type of post which appears on this blog anyway, so if you are a long-time reader of Parasite of the Day, it might as well be business as usual. 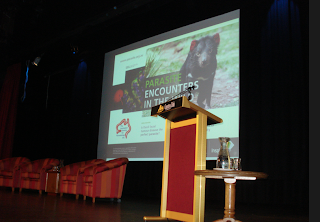 The conference started off with a series of free-to-public talk. The first was a presentation by Greg Woods, an associate professor from University of Tasmania, on the Devil Facial Transmissible Tumour as the "perfect" parasites - keep in mind I have emphasised many times on this blog (directly or indirectly) that there is no such thing as "perfect" in evolution. I first encountered the concept of DFTD as a parasite in an abstract I read from the program of the eleventh ICOPA (International Conference of Parasitology) held at Glasgow in 2006. Ever since I have been intrigued by the idea of cancerous cell lines becoming infectious and transmissible between different individual hosts/carriers (DFTD is not a lone anomaly - see also the Canine Transmissible Venereal Tumour and reticulum cell sarcoma of the Syrian hamster). According to Woods, based on current evidence, the DFTD cell line currently being circulating in the devil population had originated in 1996 from the mutated Schwann cells of a female devil (the "DFTD Eve" I guess). The original function of Schwann cells is to protect and maintain the peripheral nerve cells. The cells of DFTD are heavily modified from their ancestral form both in appearance and function, which made it difficult to identify their origin.

During the audience Q&A session, Woods also mentioned that during the course of research on DFTD, scientists were able to co-opt the background knowledge and pre-existing tools we already have for the study of human cancer cells to understand the biology of the DFTD cell line. In turn, molecular tools which were subsequently developed specifically for identifying and elucidating DFTD cells have also become useful for studying human cancer cells. Those parallel cancer research programs have proved to be a far more mutualistic relationship than that between the Tassie Devil and the DFTD cells.

Woods discussed some of the criteria which qualifies DFTD a parasite including their ability to produce immunological suppression factor, allowing them to escape the host's immune system. While some may object to calling the facial tumour cell line a "parasite" because it eventually kills their host - many parasites eventually kill their host, whether by accident or as a part of their life-cycle (as we have written about many times on this blog) - there is no universal parasite creed that goes "thou shalt not kill your host" - if parasites did have a creed it would read more like "thou shalt use the host in whatever way you see fit and get away with". 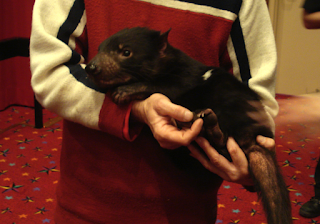 In a review on DFTD published in Trends in Ecology and Evolution, Prof Hamish McCallum wrote that the cell causing DFTD is "...essentially a clonally reproducing mammal that is an obligate parasite." which may seen radical, but once you get over the preconceived notions you may have about what a "parasite" ought to be (or what a mammal, or a "species" or "life" ought to be), it makes biological sense. After all, there are stranger things which exists in nature and biology. Those who want to read more about DFTD should see this article here. Apart from learning about DFTD, thanks to the appearance of a special guest (see right) we also found out that the infamous Tasmanian Devil is nowhere near as aggressive as most people might think...

Coming up in the next part: Parasites Gone Wild!
Posted by Tommy Leung at 8:53 AM