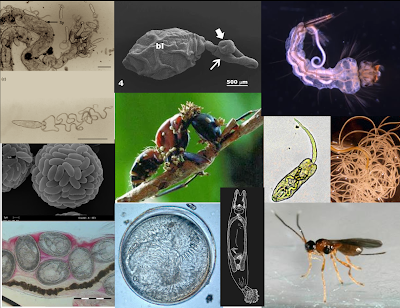 P.S. If you can't wait until next year, you can find some of my other parasite-related writing on The Conversation about freeze-tolerant parasites, a worm that usurp hornet queens, and fungi that plague the zombie ant fungus. And alongside writing this blog, I've doing a regular radio segment call "Creepy but Curious" where I sometimes talk about parasitic (among other things), like the zombie ants, the infamous crab-castrating Sacculina, the tongue-biter parasite, and the virus that melts caterpillars.
Posted by Tommy Leung at 2:49 PM