The Worms of Beasts, Tragic Romances, and Body-Snatchers 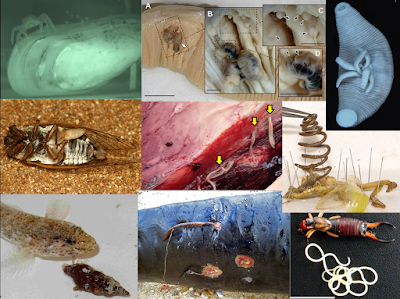 It has been yet another year of parasitology, and this year has been my fifth year writing on a regular basis for Parasite of the Day! So what had been on the parasite menu for 2015?  First of all, some of the parasites that made their way onto the blog this year have been various worms that cause misery for everyone's favourite large mammals like dolphins, panda, whales, and baboons. But it is not just large mammals that become unwitting host for parasites, for example, the giant ocean sunfish is also host to a fluke that surrounds itself in a bag of the host's flesh

If that all sounds very snug and cosy, then one might see that some of the posts can be described as love stories, though most of them with a tragic or unsavoury twists. There was a post about treacherous journey undertaken by male pea crabs to answer a booty call, a guest post by Katie O'Dwyer about sexually transmitted infection in ladybirds, and a story of how cicadas' love songs can end in tragedy (chest-burster style).

On the subject of body-snatchers, nature certainly has no shortage of them, and insects are usually the victims - in one case, tapeworms for ants which also seem to affect the behaviour of the host's uninfected nest mates. These body-snatchers also seem to get around as well, one of these well-worn travellers is a species of roundworm that was introduced to New Zealand from Europe via earwigs. That worm is a mermithid nematodes, but its lifecycle is remarkably similar to that of another phylum of worms - the nematomorphs. More commonly known as hairworms, they which share a similar life cycle to the mermithids. This year featured a post about a species which infects and ultimately kills praying mantis, but in male mantis before this parasite takes its life, it take away its junk.

On the subject of that part of the body, there was also a post about frog bladder worms which do not always end up becoming parasitic, and whether they do so depend on its circumstances during the earliest part of its life. But even if some of those worms do no always end up as parasitising frogs, there are other worms that do, for example, the kangaroo leech. It drinks frog blood, hitches ride on crabs, and takes good care of its babies. There were also other blood suckers which were featured on the blog this year, and a rather unlikely one is the vampire snail.

As for guest posts, aside from the one contributed by Katie O'Dwyer, as usual, the students from my parasitology class also wrote stories on parasitoid wasps that force their host to weave a tangled web, tailor-made for their own purpose, but it seems that different wasps also coerce their spider hosts into weaving different webs. There was also a post about a parasite that causes rabbits to end up with a severe case of Shaft Studio head-tilt, a post about how parasites affect Monarch butterfly migration, another about how these butterflies fight back, and finally to top it off, a steaming pile of hyena poop sprinkled with tapeworm eggs.

In addition to writing about new papers about parasites, I also wrote about my experience attending the joint annual meeting for the New Zealand Society of Parasitology (NZSP) and Australian Society for Parasitology (ASP), which was held in Auckland, New Zealand this year. Among other things, in the first report I wrote about the fascinating story of giant squid parasites and its link to sharks, and in the second, I mused about the near-mythical status that Toxoplasma gondii has attained in the public consciousness.

I also wrote a post about parasite in prehistory to accompany my review paper on fossil parasites which has recently been published in the journal Biological Reviews. As a companion pieces, I also wrote an article for The Conversation which focus more specifically on dinosaur parasites (because everyone loves dinosaurs). So that about wraps it up for 2015. See you all in 2016 for another year of posts about more fascinating research into the world of parasites!

P.S. If you can't wait until next year for your parasite fix, as well as writing this blog, I have also been doing a regular radio segment call "Creepy but Curious" where I talk about parasitic and non-parasitic organisms such vegetarian spiders, electric eel, shipworms, Pompeii worms, sirens, vampire squid, brood parasitic cuckoo bees and cuckoo birds, carnivorous caterpillars, green sea slugs, the macabre bonehouse wasp, and a pair of unlikely parasites in the form of mussels and bitterlings. You can find links to all these and more on this page here.

P.P.S. Some of you might also know that I also do illustrations (and provide cartoons to accompany those Creepy but Curious segments), some of my drawings are about parasites, but I seem to have gone on a somewhat odd direction with those towards the end of the year...
Posted by Tommy Leung at 4:53 PM