A lot has certainly happened this year - and I'm not even talking about parasitology. I can barely believe that as of this year, I have been writing for the Parasite of the Day on a regular basis for six years! With that said, what have been some of the highlights from the blog this year? 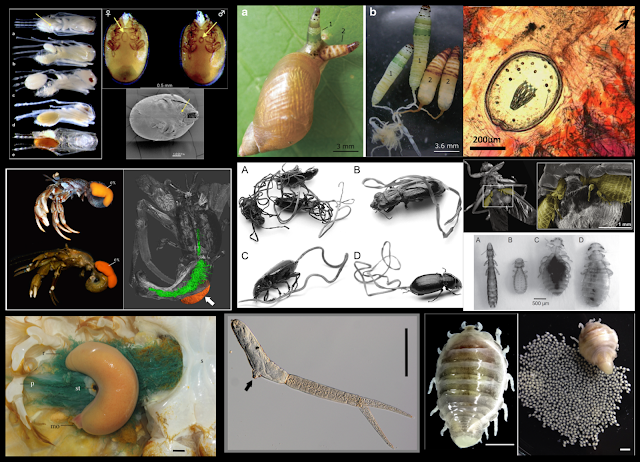 Well as usual, stories about body-snatching parasites are always popular and this year featured hairworms that parasitise ground beetles living in the frigid cold of the Arctic Circle. There were also posts addressing the true nature of some parasitic barnacles - both how their network of parasitic tendrils actually look like inside their host, and how they might be more diverse than meets to the eye. And you can't talk about life-sucking monsters without mentioning vampires, and this year also brought the tale of vampire mites that literally sucks the life out of developing ant pupae.

Of those body-snatching horrors, there was a new paper about the infamous zombie snail parasite - Leucochloridium paradoxum - which made it just in time for 2016. Leucichloridium is pretty flashy with those colourful broodsacs that cause their host's eyes to bulge out like psychedelic candy canes, but they are not the only parasite that gets into their host's eyes - this year also featured the story of a fluke which lives in the eye of a small freshwater fish and feed on its eye jelly.

But despite what it might seem from those post, having parasites might not be completely bad - there was a post on how tapeworm infection may allow brine shrimps to tolerate higher concentration of heavy metal. In addition, parasite also contribution to the ecosystem in unseen ways. For example, avian blood flukes - the parasites that cause "swimmer's itch" when their larvae blunder under our skin - may seem like a needless irritant to us. But of the millions of larvae that are pumped into the water by infected snails, the majority never reach their bird hosts, and for many other aquatic organisms, all those parasite stages that lost their ways are just another packet of nutritious morsel. And all those larvae can add up to tons of biomass each year.

Speaking of parasites that have lost their ways while trying to reach their hosts, this year featured stories about the lengths parasites go to in order to complete their life-cycles, whether they are
lice hitching rides on louse flies, roundworms that take a temporary detour in hagfish, or flukes that
embedding themselves into jellyfish. In some cases, human activities might incidentally be helping some parasites along in their life's journey.

And simply making it to the host is half of the hassle, the rest involves getting yourself to a specific part of the host, and parasites are remarkably picky about their real estate choices. For example the frog tongue fluke switches where they settle in the host's body depending on what kind of frog it finds itself in. The frog tongue fluke is not as (in)famous as a different tongue parasite - the tongue-biter in fish - but it is not the only parasite that is overshadowed by the tongue-biter's infamy. The tongue-biter belongs to a much larger group of similar parasitic crustaceans call cymothoids. While most are not as famous as the tongue-biter, some are arguably more gruesome - this year featured a species which live in a flesh capsule inside the body cavity of armoured catfishes.

As usual, there were also some guest posts, such as one by Dr Emily Uhrig on a tale about parasite in snake tails, as well as those by students from my parasitology class with posts about picky batflies, monkey botflies, maternal parasitoids, and how noisy frogs gets (bitten by) the midge.

Not directly related to this blog, but not unrelated either, my artwork took a turn for the weird (but in some ways, expected I guess) this year, and 2016 became the year of Parasite Monster Girls - so the work on my scientific side and my artistic side had finally converge...to create something that no one asked for but apparently some people find appealing. Speaking of work from my scientific side, I have a new paper published in Journal of Animal Ecology about the how bird life history and ecology influence the diversity of their roundworm parasite communities.

So that does it for 2016, see you in 2017 for more posts about new research into the world of parasites! In the meantime, you can find me on Twitter @The_Episiarch where I don't always tweet about parasites, but I do try to keep it interesting...