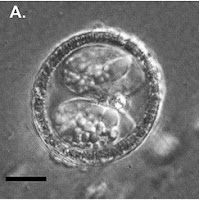 One of the highlights of my recent trip to Africa was getting to see some really neat birds in the order Coraciiformes, including hornbills, rollers, and the extremely charismatic hoopoe. This order has a few representatives in the New World, including the kingfishers, the todies, and motmots, colorful birds that are prevalent in Central America and northern South America. Recently, Yabsley et al. described a new species of parasite found in blue-crowned motmots in Costa Rica, which they named Isospora motmotana. This was the first coccidian parasite described from this bird species - as always, further proof that so much of the diversity of life out there is left to be discovered!
Posted by Susan Perkins at 6:00 AM

Email ThisBlogThis!Share to TwitterShare to FacebookShare to Pinterest
Labels: Apicomplexa