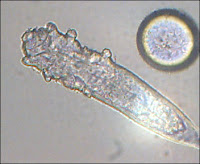 One of the things that grosses non-parasitologists out (and probably many parasitologists!) is the fact that little tiny mites live on our eyelashes. These are Demodex folliculorum, and they can actually inhabit many different follicles on humans' faces. In fact, they're a bit social - as many as 10 of them can co-exist in a single follicle (party on the forehead - spread the word!) There are no known pathogens that they spread, but they can cause people to lose hair and they can make pores larger. They don't bite people and instead they mostly just munch up the secretions from our sebaceous glands. One of the coolest things is that they seem to be so incredibly efficient at digestion that they don't produce waste - so much so that they don't even have an excretory pore for defecation. So, if you have to deal with the fact that right now there are potentially a bunch of tiny spider-like things living on your face, at least you can take a little comfort from the knowledge that they are clean house guests.
Posted by Susan Perkins at 6:00 AM