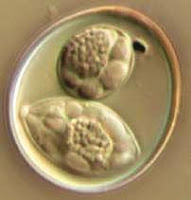 Isospora lesouefi is a coccidian parasite which infects the Regent Honeyeater (Xanthomyza phrygia), an endangered species of bird found in Australia. This parasite was found and described during a parasitological survey conducted on a group of honeyeaters at Taronga Zoo as a part of their captive breeding programme.

Before the birds can be released into the wild, their health needs to be assessed and a part of that procedure involves determining their parasite load. For animals that you want to keep alive, this usually involves counting the number of parasite eggs or spores found in their faeces. But here's the tricky bit - it turns out that I. lesouefi keeps to a daily timetable. The researchers in this study found that bird faeces collected in the afternoon contained about 200 times more oocysts (the parasite's infective stage) than those collected in the morning. Other species of Isospora also keep similar shedding schedules, and it is likely to be an adaptive trait which minimise the oocysts' exposure to desiccation and ultraviolet radiation.

This study illustrates the importance of taking multiple samples, as well as understanding the life history of the parasites when you want to obtain an accurate picture of parasite burden, and its actual impact on the health of an animal.