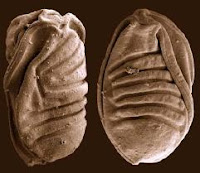 When species of plants and animals are introduced to a new environment, this can often lead to some unexpected consequences. The parasite for today is Myxidium sp. - a myxosporean that lives in the liver and brain of native frogs in Australia. But in addition to the native amphibians, this parasite is also found in the invasive cane toad. The cane toad was introduced into Australia to control cane beetles, but has since become one of the most famous posterchildren of invasive species. While Myxidium was originally thought to have been a "present" brought to Australia by the cane toad, recent research indicates that it might actually be native to Australia.

The infamous cane toad does play a role in the story of Myxidium, but in a different manner to what was originally suspected. A collaborative group of researchers from Australia and the Czech Republic found that instead of bringing Myxidium to Australia, the toad has become embroiled in an ecological phenomenon known as "spillback". This is when a native parasite adopts a newly introduced host, this new species turns out to be a better host for the parasite than the native species it was originally infecting, and the parasite propogates more successfully in the new host species.