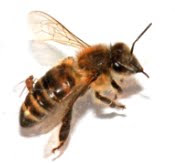 Many of you have heard of the very scary phenomenon called "Colony Collapse Disorder" - and if you haven't, you should, because it could be a major threat to the food we eat. CCD is when the worker honey bees abandon their hives and die, which, if widespread, can mean drastic decreases in pollination of crops. This phenomenon was first reported in the U.S. in 2006 and ever since that time, scientists have struggled to uncover what was responsible. Everything from cell phone radiation to genetically modified crops to a variety of parasites of honey bees were suggested to be the cause. Then, today, a new paper in PLoS One showed data suggesting that another kind of parasite is linked to CCD. Apocephalus borealis is a parasitoid fly that was known to attack bumblebees and paper wasps, but now has been demonstrated to also attack honeybees in the U.S. - in fact, 77% of the colonies sampled near San Francisco were parasitized by A. borealis. The authors used DNA barcoding to confirm that the flies in the honey bees were genetically indistinguishable from those parasitizing bumble bees.

The authors of the new study also found that bees that were found flying around at night (something honey bees don't normally do) were significantly more likely to be parasitized by the fly and furthermore, the sick bees also seemed disoriented. It is not currently known whether or not the tendency for the parasitized bees to fly at night away from their colonies is another example of manipulation of the host by a parasite or whether this might be an act of altruism by the bee, carrying its parasite away from its colony and thus protecting the others.

Although these new results are very exciting, many questions remain to be answered about the history and impact of A. borealis. First, when did the switch into honey bees occur? Honey bees are not native to the U.S., but since they are so well monitored and studied, the authors believe that the switch must have happened recently - otherwise it would have been noticed by apiculturists. Second, could these flies also be serving as vectors for other bee pathogens? Two known bee pathogens, Deformed Wing Virus and Nosema ceranae, a microsporidian were found in the A. borealis flies. And finally, could the invasion of honey bees by this parasite mean that CCD is going to increase? The natural hosts of A. borealis are bumble bees, which live in small colonies where only the queen herself survives the winter, but honey bee colonies have thousands of bees and their activity maintains some amount of heat, even in colder winter months. This increase in host resources and more generations per year could spell a population explosion of A. borealis...and that won't be good for those of us who depend on pollination - like all of us.

The image is from the paper. Look closely at the abdomen of the bee - that's a little parasitic fly laying eggs into it. Soon the larvae will emerge from the dead host. (You can see a photo of this in the original paper as well.)