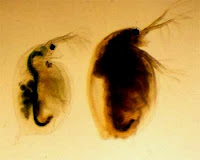 Parasitic infections can severely debilitate the host in many ways, sometimes this manifests itself as the loss of some, or even all, of the host's reproductive ability. Evolutionary speaking, an organism that cannot reproduce is as good as dead. However, it's not entirely clear who (if anyone) is benefiting from this outcome - is it; (1) a survival strategy by the host to temporarily free up resources to compensate for the parasite's presence? Or is it (2) an adaptive strategy by the parasites to divert as many resources as possible to themselves without compromising the host's ability for self-maintenance and survival? Or is it (3) merely an unintended side-effect of infection? Of course, (1) and (2) are not mutually exclusive, and in the case of (3), even if it had started out as an unintended side-effect of infection, if host castration resulted in higher reproductive fitness for the parasite, then that trait will be positively selected for and become part of the its repertoire of host-exploitation strategies.

Waterfleas (Daphnia) are infected by all manner of parasites (we featured one of them during the early days of the blog: Caullerya mesnili) ; most of them are pretty nasty - they often end up castrating and/or killing the host. Pasteuria ramosa is no different - it is a spore-forming bacterium that infects waterfleas, makes them bloated, darkening their body (see the right waterflea in the photo) and castrates them in the process. While it was previously thought that any waterfleas infected by P. ramosa were permanently castrated, it turns out that some lucky Daphnia can actually recover from their infection.

So do these little crustaceans adjust their reproductive output in response to the parasites and is castration a way for them to compensate for a (potentially) temporary hiccup in their baby-making ability? To find out, a team of scientists from Norway set out to see just who benefits the most from host castration. Their logic is that if it is an adaptive strategy by the parasite, then we should see higher spore output from a permanently castrated host. Whereas, if castration is an adaptive coping mechanism by the waterflea, then there should be a jump in reproduction upon the onset of infection as the waterflea tries to make as many baby Daphnia as possible before P. ramosa put a stop to it, then store up reserves during the infection to "wait it out".

To correct for any potential sex differences (there are many documented case of sex-bias in parasitism), these scientists used only female waterfleas for the experiment. During the course of the study, about half the waterfleas they infected with P. ramosa managed to regain their reproductive capacity. In those lucky ones, the parasite produced many fewer spores than in waterfleas that had been permanently castrated. So evidently, P. ramosa benefits from having permanently castrated hosts. But what about the waterfleas themselves? Were they able to compensate by adjusting their reproductive output in the parasite's presence?

The scientists found that by far, the strongest predictor for the lifetime reproductive output of a parasitised waterflea is the age at which it becomes infected - the later that it became infected, the more time it had to churn out babies before it came down with a severe case of P. ramosa. So it's pretty much a case of "use it or lose it". They did not find evidence to suggest the waterfleas made any effort to increase their reproductive output before they are castrated by their parasites. This is unlike other systems where parasite-castration occurs. In trematode-snail systems, the infected snails are less likely to recover from their infection. The strategy which has evolved among snails in areas with high parasite prevalence is to reach sexual maturity as quickly as possible (For example: see this study) so they can eke as many baby snails as they can before they inevitably become infected and be taken over by squirming body snatchers.

It should be noted that the waterfleas used in the experiment were from Southern Finland, whereas the parasites were isolated from a pond in Northern Germany. So perhaps the reproductive strategy of the Daphnia population used in that experiment has evolved in response to their local parasite(s) population instead. Other studies have found waterfleas to be locked in a close evolutionary race with their parasites across space and time, so the outcome of any host-parasite interaction will be dependent on the genetic identity of both host and parasite.