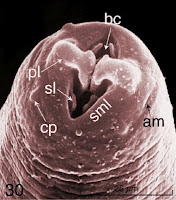 When I saw the reports of giant amphipods being dragged up from the Kermadec Trench off the coast of New Zealand, my immediate thought was "I wonder what parasites it has?" This promoted me to do a write-up of a paper I've read recently, which is about a parasite that infects amphipods - admittedly those that are more modestly sized. Today, we are featuring a study on Ascarophis, a nematode worm that infects an intertidal amphipod (Gammarus deubeni) in Passamaquoddy Bay, New Brunswick, Canada. Compared with related species this worm has evolved to live the simple life(-cycle), and avoids the complications that come with having a complex life-cycle.
Previously on this blog, we have featured parasites that have evolved to take short-cuts with their complicated life-cycles. When a particular host is absent, such parasites may opt to ditch that host from their life-cycle, and switch up their developmental schedule. This is the case with the fluke Coitocaecum parvum. However, while C. parvum can switch between different life-cycles depending on circumstances, Ascarophis has completely abandoned that altogether, and has evolved to make things simpler by completing its entire life-cycle within its amphipod host. Usually, parasites with complex life-cycles use different hosts for different functions - i.e., one host might merely serve as a transport and/or resources for temporary development, whereas another acts as a mating ground and/or habitat in which it reaches maturity. So how can Ascarophis get so much functionality out of a tiny little crustacean?
Nematodes normally go through 4 larval stages (L1-L4) before becoming a sexual mature "fifth stage" worm (L5). The end of each larval stage is accompanied by a molt (rather like insects). In related nematodes that have retained their complex life-cycle, the L3 worms (which are ready to infect the next host) live encapsulated in the first host, while the L4-L5 live in the digestive tract of the final host. What the researchers found with the Ascarophis they collected from New Brunswick is that L1 and L2 worms were found in the muscle tissue, and upon reaching L3 the worms begin to migrate into the body cavity where they complete their development into adulthood and start producing eggs. Now compare this with Ascarophis from the White and Baltic Seas, which also infect amphipods, but uses a species of sculpin as their final host. Those fish acquire their infection by eating amphipods infected with L3 stage nematode, and the worms develop into adults in the fish's gut.
In effect, the Ascarophis from New Brunswick gets the most out of its little crustacean host by using different parts of the amphipod's body as surrogates for different hosts - instead of being transmitted to a different host, it simply moves to occupy a different part whose function is close enough to its needs for it to complete its development. Unlike the C. parvum, it appears that Ascarophis has abandoned the fish host altogether, and has committed itself to using the amphipod as the sole host for its entire life-cycle. Even though the Ascarophis found in the White and Baltic Seas have retained their complex life-cycle, researchers of this study suggested that they are the same species as the worms they looked at, but the New Brunswick variant has simply adapted to local condition and evolved a different life-cycle. However, it must be noted that the researchers have come to this conclusion based on the worm's morphology and as we have seen before, appearance can be deceptive with nematodes.
Through all that, this plucky little New Brunswick parasite faces one last problem - getting its eggs out of its crustacean host. For worms that live in inside a fish's gut, passing eggs out into the environment is a pretty straightforward affair - the eggs simply get washed out with the poop. But there is no exit in the body cavity of an amphipod, so how is a worm supposed to cast its eggs out into the environment? Well, this thrifty nematode simply waits for the host to die, and as the body disintegrates, the eggs are released as well. Of course, it helps that these amphipods have a tendency to cannibalise the rotting bodies of their fallen comrades - this presents the perfect opportunity for the parasite to infect a new batch of hosts - yet another reason to not gnaw on any random corpses you may come across.
Image modified from figure in the paper
Reference:
Appy, R.G. and Butterworth, E.W. (2011) Development of Ascarophis sp. (Nematoda: Cystidicolidae) to maturity in Gammarus deubeni (Amphipoda). Journal of Parasitology 97: 1035-1048.
Posted by Tommy Leung at 8:46 PM