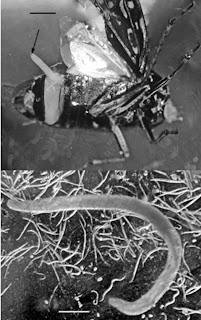 Today's parasite and host are found among the dunes on the coast of Waldport, Oregon. In this story, the host is a little bug - and by bug, I do mean it in the literal scientific sense of the word, as in a hemipteran insect - the shore bug Saldula laticollis. The parasite is a nematode called Halophilanema prolata which, when translated, means "elongated sea salt-loving thread" - which sounds like an item you can find in a specialty gourmet shop or a post on a foodie forum. The mature female worm lives inside the bug's body cavity (top photo), surrounded by her babies (bottom photo). The larval worms reach a very advanced stage of development inside their mother's uterus before they emerge into the bug's body cavity. Each larva then escapes into the sun and surf and undergoes a final molt. It then finds an attractive mate in the sand, and gets on with the business of making the next-generation of bug-infesting worms.
Post-coital, the now fertilised female climbs onto any unfortunate shore bug that happens to be passing through the neighbourhood, and starts digging in. Most of the bugs infected by H. prolata were found among clumps of rushes along a distinct line of yellow-tint sand at the high tide mark. This sand contains a potpourri of algae, microbes, and nematodes - including H. prolata at various stages of development. This is evidently a hot spot for the parasite, because in that area, up to 85% of the bugs are infected.
Now, something must be said about the habitat of today's host and the parasite. The intertidal zone is a harsh habitat, especially for both insects and nematodes. Any organisms living in such areas must be able to endure being periodically immersed in seawater, and then left high and dry by the retreating tide. The combination of saltwater, periodic immersion and exposure poses severe osmoregulation challenges, which is why despite their great diversity, comparatively few insects have colonised the intertidal habitats. But what about H. prolata?
There are nematode worms which live permanently in marine habitats, and they have bodily fluids that are the same level of saltiness as seawater so they don't suffer from osmotic stress. But H. prolata has evolved from a lineage of terrestrial nematodes which would be subjected to severe osmotic stress (just like how you will dehydrate if you are immersed in seawater for too long - the high solute concentration of seawater draws fluid from your cells). So how do they manage?
Halophilanema prolata has evolved a raincoat of sorts - its cuticle has very low permeability (very difficult for water to move through it) so that it retains its body fluid more readily than animals with more permeable body walls. This also makes these little worms very resistant to other types of chemical stress - they can survive being immersed in 70% ethanol or 5% formalin (which are usually used for pickling biological specimens) - for up to 48 hours - because as well as making it difficult for fluid to diffuse out, a cuticle with low permeability also makes it difficult for other liquid to diffuse in.
So the next time you are at a beach, think about the little insects which are running around with nematodes swimming in their innards, and the microscopic worms getting it on underneath your feet. Why would you want it any other way?
Image from the paper by George O. Poinar Jr.
Poinar Jr, G.O. (2012) Halophilanema prolata n. gen., n. sp. (Nematoda: Allantonematidae), a parasite of the intertidal bug, Saldula laticollis (Reuter)(Hemiptera: Saldidae) on the Oregon coast. Parasite and Vector 5:24
Posted by Tommy Leung at 7:47 AM