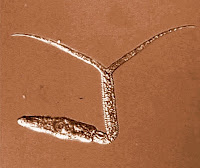 Most animals are infected by multiple species of parasites or multiple strains of the same parasite species that are not close kin. Rarely does an individual parasite (and its close kin) gets to monopolise the resources of an entire host. So do parasites like to share? The answer to that depends on the host (and parasite) in question. Because different species often exploit a single host in different ways, a parasite can share a host with many other species without ever coming into conflict with them. But, when a parasite finds itself sharing a host with members of its own species, competition is more likely to occur as they are all going to be after the same (limited) resource (whatever that may be) from the host.
For some parasites, competition arising from coinfection can favour the most virulent strains, leading to greater overall harm to the host. But more recent studies have shown that the most competitive strains are not always the most virulent. In some cases, competition between co-occurring parasites can actually be beneficial for the host as the parasites end up mutually suppressing each other. How this plays out depends on how the parasite uses its host, and in parasites that have complex life-cycles, this can change from host to host.
The parasite we are looking at today is Diplostomum pseudospathaceum - more commonly known as the eyefluke. As with most parasitic flukes, D. pseudospathaceum uses a snail for the clonal stage of its life-cycle to make thousands of larval stages (called cercariae), which are then released into the water to infect any nearby fish. In the fish, the parasite migrates to its eye and uses it as a temporary vehicle to reach its next host - a fish-eating bird. Diplostomum pseudospathaceum essentially turns its snail host into a parasite factory, using the snail's bodily reserves as raw material to produce its army of clones. There is only so much to go around inside a snail, and when a particular D. pseudospathaceum strain has to share a snail with other strains, it ends up producing many fewer cercariae than if it had the whole snail to itself. But while it is detrimental for D. pseudospathaceum to have close company in the snail, it is a different story in the fish.
While D. pseudospathaceum undergoes a resource-hungry spree of rampant asexual multiplication inside the snail, it is relatively dormant inside its fish host. All it needs from the fish is a space to tuck into within its eye - and there is plenty of room in the fish's eye for these flukes. In fact the more the merrier given that at high numbers the eyeflukes can induce the formation of cataracts - and a half-blind fish is more likely to be eaten by a bird. But there is also another reason for D. pseudospathaceum to be more welcoming to strangers in the fish host.
The immune system of the fish is remarkably adept at responding to intruding parasites, and the immune system can be quickly "primed" towards recognising and destroying particular parasite strains. To reach the fish's eye, D. pseudospathaceum has to complete a treacherous journey through the fish's body, all while under close scrutiny and assault by the fish's immune system. In fish that have previously been exposed (and thus "primed") to D. pseudospathaceum cercariae, the chances of the parasite successfully reaching its destination are greatly diminished. But while a fish might be "primed" towards cercariae of a particular strain, a double- or even triple-prong attack is likely to overwhelm its finely-tuned targeting system. When exposed to simultaneous attacks from multiple, genetically-diverse strains of D. pseudospathaceum cercariae, the fish's immune system becomes overwhelmed, which in turn allows more eyeflukes to slip by.
In the life-cycle of D. pseudospathaceum, there is a time and place for everything - while there is a time to be on the look out for number one, there is also a time to love thy neighbour.
image by Tina Loy, modified from here
Karvonen A, Rellstab C, Louhi KR, Jokela J. (2012) Synchronous attack is advantageous: mixed genotype infections lead to higher infection success in trematode parasites. Proceeding of the Royal Society B 279: 171–176
Posted by Tommy Leung at 9:49 AM