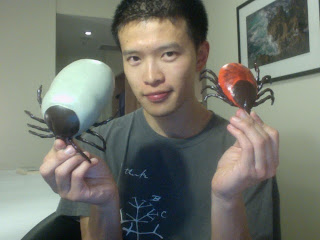 Last month, I attended the 24th International Conference of the World Association for the Advancement of Veterinary Parasitology (WAAVP 2013). While veterinary parasitology is not my usual scene, it was also a joint conference with the annual Australian Society for Parasitologists meeting, and there were also plenty of wildlife and aquatic parasitology on the program that caught my interest. The major themes of this conference included food security and public health in relation to parasites. As this was a big international conference and there were multiple concurrent sessions, the talks that I will be writing about here will be heavily biased towards my own experience and interests - but if any of you reading this also happen have attended WAAVP 2013, feel free to leave your own highlights in the comment section.

The conference reception night kicked off with a public event call "Parasites and Pets, Pets and You" which I live-tweeted (see the storify here). The presentations were about the critters that live in and on people's beloved pet as well as addressing many myths and misconceptions about parasites. The presentation addressed zoonosis and how while it is possible to catch parasites from your pets, you are more likely to catch parasites from the people around you, also that you are more likely to get infected with Toxoplasma gondii from contaminated food than from cats. (On a side note, during the reception night I also picked up some appropriately themed souvenirs - see photo above)

The first day of the conference began off with a plenary session on the history of veterinary parasitology in Australia by Ian Beveridge and Brown Besier. Later in the morning I saw a talk by Melissa Beck on Dicrocoelium dendriticum. For those who don't know, D. dendritium is also known as the lance fluke - the parasite well-known for hijacking the brain of its ant host, causing it to climb to the top of the blade of grass and stay there all night, waiting to be eaten by its next host (a grazing mammal such as a sheep or a deer). Beck's study looked at the age-related pattern of lancer fluke infection in free-ranging wapiti (Cervus candensis) in Alberta, Canada. The study was carried out in Cypress Hills Provincial Park, Canada (so I guess you can say that the ants in that area which are infected with lancet flukes are *[don sunglasses]* - Insane In The Membrane?). She found that the elks seem to become less infected as they get older, with the majority of flukes in the host population found in younger individuals. This may be due to the adult elks having a more robust immune system which prevents them from becoming reinfected by the lancet fluke, or it might even involve some kind of behavioural defence that develop in mature individuals (adult elks learning to avoid eating ant-laden grass?).

Later on that same day, I gave a talk on a study I conducted with my collaborator Amanda Bates on the global pattern of disease outbreaks in aquaculture (which you can read for free here), afterwards I saw a session on the wide variety of parasites that currently plague aquaculture the world over. There was a talk by Ronald Kaminsky on the development of anti-parasite compounds and the salmon lice that are evolving resistance to them. This was followed by Supranee Chinabut who discussed the different types of parasites that infect captive fish in southeast Asia such as monogeneans (ectoparasitic flatworms), parasitic crustaceans, and infectious protozoans (like the startlingly beautiful Trichodina), emphasising the importance of having multiple strategies for dealing with outbreaks of different types of parasites.

In the same session, Kyle McHugh presented a study looking at how introduction of popular angling and aquaculture species such as the large mouth bass and grass carp has brought with them various parasites such as anchor worm and the Asian fish tapeworm that now infest South Africa's own native freshwater fish. Finally Zoe Spiers presented some results from an investigation into the aetiology of oyster winter mortality syndrome - a disease which causes significant loss to oysters farms along the coast of New South Wales, Australia every year. The investigation involved a combination of ecology, histopathology and molecular biology, and while it is commonly believed that oyster winter mortality syndrome is a disease caused by the protozoan parasite Bonamia roughleyi, the result Spiers presented indicates that the symptoms of the disease is not always associated with B. rougleyi and that the actual agent(s) causing winter mortality is still unclear.

Keeping the theme underwater, I attend a session the next morning on aquatic parasitology Sarah Catalano (she presented a talk about those parasites at last year's Australian Society for Parasitology meeting) about using the weird and wonderful dicyemid parasites to distinguish different sub-populations of cuttlefish in the waters of South Australia. Dicyemids are very odd parasites that live exclusively in the renal sac of cephalopods, and their exact taxonomic position on the tree of life is currently unknown.

Carlos Hermosilia presented a study which was quite astonishing in its the method of execution. Hermosilia conducts research on the parasites of dolphins but while most studies on dolphin obtain sample from dead stranded dolphins, he chases after parasites from live dolphins, and I mean that quite literally. His methodology involves swimming after dolphins with a tube and scooping up their poop (or vomit). That's right, just like how a responsible dog owner might scoop up after their pooch, but with dolphins - which are powerful swimmers - not to mention dolphin poop comes out in a cloud instead of Fido's neat little turds. Needless to say, chasing down flipper with the aquatic equivalent of a pooper scooper sounds like no mean feat. He found that dolphins harboured all the usual parasitic protozoan and intestinal worms one would expect from a marine mammal, but one unexpected finding was a cymothoid isopod in a dolphin vomit sample. Cymothoids are usually fish parasites (including the infamour "tongue-biter") so it is quite likely that the crustacean might have been from a fish that the dolphin just ate.

Hermosilia's tale of dolphin chasing and poop scooping was followed by a talk on the spirochiid blood fluke of marine turtles by Phoebe Chapman. Spirochiid blood fluke can cause disease in sea turtles and there are 91 species of spirorchiids described worldwide, 30 of which are found in marine hosts.  The species found in sea turtles live in the cardiovascular system of the host where they mate and lay eggs - which is the main cause of disease (at this point it is unknown how the eggs reach the outside environment - there is even a hypothesis that they simply wait for the host to die to be released). The eggs of spirochiid can become lodged in the turtles organs, causing embolism, thrombosis, lung fiborsis, and a long list of other internal injuries. Currently there is no way of detecting the presence of spirochiids in the host while it is still alive and a part of Chapman's research involve developing a method for diagnosing spirochiid infection in live animals.

I will be writing about the rest of Tuesday and the rest of the conference in Part Two of my special report on WAAVP 2013. Stay tuned as there are more to come including tongue-biters, snails and flukes on the rocks, ticks (real ticks, not plastic ones) and parasites of various weird and wonderful wildlife.