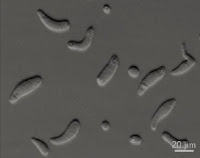 Today's parasite, Hematodinium sp., infects blue crabs and causes a disease known as "bitter crab". While the name may sound just slightly nauseating for your palate, for the afflicted crabs, its symptom is down right horrific. The parasite causes the crab's hepatopancreas (equivalent of our liver and pancreas) to malfunction, it starts suffocating, and its muscles eventually dissolve within its exoskeleton. Crabs that are experimentally infected start dying about 2 weeks after initial exposure, and this deadly parasite may have even contributed to the recent decline of blue crabs in Chesapeake Bay.

Hematodinium and related species are dinoflagellates, and while most dinoflagellate are free-living, this species belongs to a group which have evolved to be parasites, with many different species infecting a wide variety of hosts. While several different stages of the parasite have been isolated from the blood of infected crabs, little is known about how they are transmitted between hosts, nor the inner life of those different stages in the hosts. Because many parasites live enclosed within the body of their hosts, it is almost impossible to directly observe how they live and grow the way you might be able to observe a fish or a bird. Ideally, if you can isolate a parasite out of its host, put in it a clear container which closely mimics the conditions found within its host, and still have it complete its life-cycle, then you can find out a lot more about how it lives.

Recently, a group of researchers from Virginia were able to successfully complete the life-cycle of Hematodinium - in vitro - which means they were able to grow it in a culture of chemical broth that sustained the parasite's every need, without any host animals involved. This was accomplished through a painstaking series of transfers, starting with isolating the parasite from infected crabs, then moving each stage into different culture mixes as it grew, all while keeping the conditions as sterile as possible. Out of the 10 isolates they attempted to grow, only 4 successfully completed their life-cycle in vitro. The researchers also found out that the parasite grows best in the dark, and indeed light exposure kills them within weeks, which makes sense given that it is pretty dark inside a crab (a variation on the Marx Brother joke).

Through this in vitro technique, they were able observe the different parasitic stages of Hematodinium directly, and view them as they would have been while floating in the blood and organs of a blue crab. They noted that when Hematodinium cells first enter the crab as "dinospores," they turn into a worm-shaped form called a "filamentous trophont" (see the accompanying photo which was from a figure in the paper). About a month after that, the cells begin transforming into clumps that are composed of multiple clones of the original infection stage. These clumps then grow into a stage called an "arachnoid trophont," which resembles a blob with numerous tendrils around its fringe (which would be embedded in the hepatopancreas of the crab). These clumps tend to merge and form larger blobs as they come into contact with each other. When those "arachnoid trophonts" fully develop, the cells in the middle of the blob start producing spores that eventually turn into the infective dinospores that escape from the crab to infect new hosts, starting the life-cycle anew.

Postscript: Three days after this post went up, I was contacted by Peter Coffey, who used to work on this species of parasite with a bit of additional information/correction: I just have one quick comment on the first sentence in your post. In blue crabs we don't see the same bitter flavor that we do in Alaskan Tanner and Snow Crabs, so we haven't been calling infections in blue crabs BCD.
Thanks Peter!
Posted by Tommy Leung at 7:18 AM