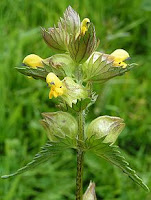 Many parasites can have substantial effects on their hosts, but their impact can often extend to other organisms in the environment. Today's parasite is one of the more pretty-looking ones which we have featured in a while - as opposed to the usual worms and lice, today we are featuring a flowering plant - the yellow rattle. But don't let its pretty yellow flowers fool you, Rhinanthus minor is a ruthless parasite.

It is a hemiparasite (like the mistletoe , which becomes rather popular during this time of the year). The plant overwinters as seed in the soil and germinates during spring, penetrating into the roots of its host plants where it can suck out nutrients and water from the plant's xylem tissue. The yellow rattle is a fast growing plant - it flowers 12 weeks after germination and 3 weeks after that it produces seeds that are loosely held in dry capsules, which gives the plant its name. The yellow rattle often share its host plants with a range of insects, so a group of researchers in the UK decided to look at how this hemiparasite can affect those insects. Specifically, they looked at the effects of R. minor on insects that exploit plants in different ways; the aphid that feeds on the sugary sap flowing in the plant's phloem, the spittle bug, which taps into the xylem that transports water and other nutrients, and the grasshopper, which simply chews on leaves.

The researchers predicted that over the course of its growth, the yellow rattle would affect those insects differently. They were expecting that it would negatively impact on the spittle bug, because that insect and the hemiparasite both draw their nutrients from the host's xylem. But as is often the case in science, they found something unexpected.

First of all, they found that the effect R. minor had on those insects depended upon the parasite's growth stage, and it becomes most pronounced when the yellow rattle reaches its peak biomass and begins setting seeds. However in contrast to what they were expecting, spittle bugs actually preferred plants parasitised by R. minor. But the insect that benefited the most from the hemiparasite's presence were the aphids. Not only did they prefer sharing a host plant with the yellow rattle (there were three times as many aphids on plants with R. minor compared to uninfected plants), they also tend to breed more on infected plants. What about the grasshoppers? Grasshoppers were not all that affected by the presence of the yellow rattle either way.

The mechanism behind why the yellow rattle makes its host more attractive to plant-feeding insects is currently unknown. However, it may have something to do with the hemiparasite altering the water content of the host plant, or changing the composition of the phloem sap, which makes it more nutritious to aphids. Either way, it seems that at least for some insects, sharing a plant with a hemiparasite might actually be a good thing.