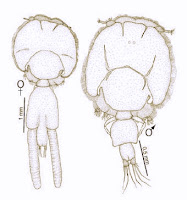 Today, we are featuring a paper which reported on a grey reef shark (Carcharhinus amblyrhynchos) at Burger's Zoo in the Netherlands that had to be euthanized. "Wait a sec!" you think, "Isn't this supposed to be a blog about parasites? I didn't come here for dead sharks!" Well, just calm down before you close your browser tab in outrage. This particular shark actually succumbed due to a heavy infection of today's parasite - Lepeophtheirus acutus. This parasite is in the same genus as other fish lice that we have previously featured on this blog, but very little is known about this particular species. Prior to this incident, it has only been reported once from the wild, and it was found on the back of a ribbon-tailed stingray (Taeniura lymma), not a shark and certainly nothing was known about how harmful it can be to its host.

From what the staff at the aquarium could work out, this deadly little crustacean was introduced to the facility by an infected male zebra shark (Stegostoma fasciatum) collected off Cairns, Australia on the Great Barrier Reef, which appeared perfectly healthy at the time and passed quarantine. However, about 2 weeks after he was introduced into the aquaria with the other fishes, he started acting weird. At the same time, the grey reef shark mentioned at the start of this post became lethargic and ceased to eat regularly, and about a month after that, both sharks were afflicted with swollen and opaque eyes. Despite the best efforts of the staff to put the infected sharks in quarantine, filter the water with activated carbon, and give them anti-parasite drugs, they were unable to save the grey reef shark, by which time it was swimming with its mouth wide open, not eating at all, and its eyes had deteriorated even further, so the decision was made to euthanize the long-suffering shark.

A necropsy revealed the identity of the killer - a parasitic copepod - most of which were found around the shark's eyes which caused them to become swollen and covered in mucus, and the mouth which led to bleeding gums. The parasite was also found on a female zebra shark and a shovelnose ray (Glaucostegus typus) which shared the aquaria with the deceased grey reef shark. Notably, the blacktip reef shark (Carcharhinus melanopterus) and blacktip sharks (Carcharhinus limbatus) which swam in the same water alongside those infected sharks did not become infected, nor did the many different species bony fishes sharing the same tanks and water. This indicates that L. acutus does display some selectivity in the type of host it infects, with a particular preference for elasmobranchs (sharks and rays), and even then only certain species within that group.

Other than the dead grey reef shark, the other infected sharks survived and recovered fully after treatment. However, this incident shows how outbreaks of infectious diseases can be a big problem for animals in the confined conditions of captivity. In the case of L. acutus, its small size, semi-transparent body, its tendency to infect parts of the host that are difficult to inspect (for example, inside the mouth), and the fact that nothing is know about its ecology meant that the staff had not anticipated such an outbreak. It was the first documented case of infection by a parasitic copepod that led to a shark dying in captivity. This case also illustrates the importance of thorough quarantine procedures, especially when introducing new animals into any facility, as captive conditions can seriously alter the transmission dynamics and pathology of relatively harmless parasites.

Image from figure in the paper.