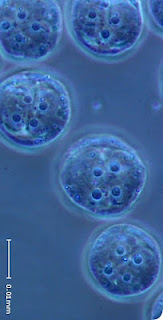 For many parasites, host castration is a very effective strategy. By specifically diverting energy from the host's reproductive functions, the parasite can horde as many resources as it can without compromising any organs or functions that are vital to everyday survival of the host. It is a strategy commonly used by digenean trematodes (parasitic flukes) and some parasitic crustaceans.
But, those parasites infect hosts that exist as discrete individuals (unitary organisms) - what about modular animals like corals and salps that live as colonies composed of many genetically identical individuals? Such organisms undergo alternating bouts of asexual and sexual reproduction throughout their life-cycle - so are there parasites that can castrate such hosts?
Today's parasite is Tetracapsuloides bryosalmonae - it is a myxozoan, parasites that were once thought to be protists, but are actually related to jellyfish and corals in the phylum Cnidaria. Throughout their evolution, they have simply been heavily modified for a parasitic way of life. Tetracapsuloides bryosalmonae has a very comprehensive scientific name in terms of describing its life-cycle - the species name encompass both of the parasite's hosts; bryozoans and salmon. In salmon, it causes a serious disease call Proliferative Kidney Disease (PKD), but less is known about its ecology in its bryozoan host
Bryozoans are also called "moss animals", and they are quite odd (even if rather common) little critters (you can read more about them on the Bogleech website here). They are colonial animals that live as a collective of individuals called "zooids", and are encased in a mineralized exoskeleton that can take on various shapes including fans, bushes, and flat sheets. Most of the time, the colony grows by budding genetically-identical zooids (clones), and colonise new habitats when fragments of the colony break off and settle elsewhere. But during lean times, the colony starts producing statoblasts, which are tough little capsules of cells that can be released into the environment to start the colony anew elsewhere, rather like seeds.
Most of the time, T. bryosalmonae exists as a quiet, secretive infection in the form of single-cells embedded in the body wall and proliferates as the colony grows. But this parasite can also switch into a more overt mode where it starts producing multicellular sacs of parasite cells, and because individual zooids are connected to each other in the colony via a common body cavity, during such flare-ups, the infection can spread throughout the colony. During the overt phase of the infection, T. bryosalmonae effectively castrates the bryozoan, and infected colonies cannot produce statoblasts.
However, on the flip side, because infected colonies aren't diverting resources towards producing statoblasts, they are better able to survive periods of starvation and suffer fewer overall zooid deaths comparing with uninfected colonies. In the natural setting, T. bryosalmonae usually enters its overt phase during late spring or autumn when the bryozoan colony undergoes its greatest period growth of asexual growth - which gives the parasite more opportunities to spread. As the parasite subsides back into its covert phase again, the bryozoan colony once again has an opportunity to produce statoblasts.
By cycling between a covert and overt phase, the parasite can persist without causing damage that can compromise the host's survival. Asexual colonial organisms can avoid permanent castration like that seen in snails infected with parasitic flukes. Theoretically, colonial modular animals can potentially live indefinitely due to their mode of reproduction. But another benefit associated with such a life-style could be an increased tolerance for infection - whereas discrete, unitary animal might be completely sterilised by host-castrating parasite, when infected with a parasite like T. bryosalmonae, modular animals can simply bide their time and reproduce when the parasite subsides between periods of overt infection.
Image from the Natural History Museum
Reference:
Hartikainen, H. and Okamura, B. (2012) Castrating parasites and colonial hosts. Parasitology 139:547-556
Posted by Tommy Leung at 8:06 PM

Email ThisBlogThis!Share to TwitterShare to FacebookShare to Pinterest
Labels: myxozoa