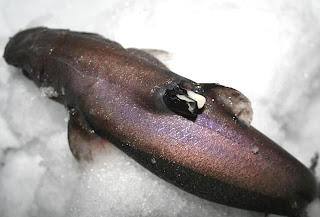 While many barnacles can be found using large marine vertebrates such as whales and turtles as substrate for attachment, surprisingly few are actually true parasites of marine vertebrates. However, there's always a species to buck the trend. Anelasma squalicola is a rather strange parasite. This barnacle is a parasite of deepwater squaliforme (dogfish-type) sharks such as the velvet belly lantern shark, Etmopterus spinax. It seems to be rather specific about where it embeds itself in the host, and most Anelasma are found attached near the front or alongside the shark's first dorsal fin, in numbers ranging from one all the way up to four in a cluster.

Unlike the heavily derived order of parasitic barnacles, the rhizocephalan (such as the Sacculina carcini), Anelasma looks superficially like most barnacle, especially the part that protrude from the body of the host, with the exception of the soft body and the lack of calcerous plates. However, the similarity to the usual barnacle ends there. Anelasma has no feeding limbs and the rest of this peculiar barnacle is an onion-shaped bulb inserted into the host tissue. This bulbous structure is equipped with numerous root-like tendrils that infiltrate the host tissue enabling the parasite to absorb nutrienst from its host.

Anelasma severely imparis the development of the shark's reproductive organs. While many parasites are known to castrate their host, and indeed all trematodes castrate their first intermediate host during the asexual stage of their life cycle (see Maritrema novaezealandensis for example and details), this is one of the few known parasitic castrators of a vertebrate host.

For more details see:
Yano, K. and Musick, J.A. 2000. The effect of the mesoparasitic barnacle Anelasma on the development of reproductive organs of deep-sea squaloid sharks, Centroscyllium and Etmopterus. Environmental Biology of Fishes, 59:329-339.