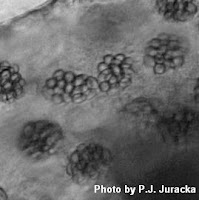 Caullerya mesnili is a unicellular parasite that infects the gut of several species of waterfleas (Daphnia spp.), a type of abundant zooplankton, commonly found in many freshwater lakes. This parasite is very virulent (harmful) to its host. Once the infection becomes established, the host is castrated and eventually dies less than 3 weeks later. During this entire period, the infected individual will be releasing spores that then infect other waterfleas in the environment.

There is evidence that the genotype of the waterflea affects the infection success of C. mesnili, with the most common genotype in a given population being more frequently infected by this deadly parasite. Thus both the waterflea and parasite are engaged in a coevolutionary relationship which maintains genetic diversity in both populations, operating in a manner predicted by the "Red Queen" hypothesis.

You can read lots more about this parasite in this paper and/or this one.

Email ThisBlogThis!Share to TwitterShare to FacebookShare to Pinterest
Labels: crustacean