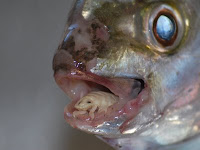 Cymothoa exigua is a parasitic isopod with a very odd and gruesome life cycle. Juveniles first attach to the gills of a fish and become males. As they mature, they become females, with mating likely occurring on the gills. The female then makes its way to the fish’s mouth where it uses its front claws to attach to the fish’s tongue. It begins to feed on the blood in the tongue until the tongue eventually atrophies completely. The isopod then takes the place of the tongue in the mouth, attaching to the floor of the mouth and the stub of what is left of the tongue with its hind pereopods. There it lives out the rest of its life – even letting the fish use it like its old tongue, holding prey against its teeth. Although these parasites were long thought to be restricted to the Gulf of California and environs, recently one turned up in the mouth of a fish that was caught off the coast of the U.K.
Posted by Susan Perkins at 8:13 AM