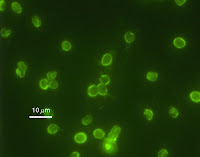 In 1993, almost 25% of the residents of Milwaukee, Wisconsin came down with severe stomach cramps, fever, and diarrhea. Over 100, mostly elderly or immunocompromised residents, died. The cause? The most common water-borne disease in the developed world: Cryptosporidium. Cryptosporidium parvum is one of many species of this group of apicomplexan parasites, distant relatives to those that cause malaria and toxoplasmosis. Water supplies may be tainted with the oocysts of these parasites, which are then consumed by people. In the small intestine, the parasites attach to the villi and begin to asexually divide. Eventually they will produce gametocytes - macrogametocytes are female, microgametocytes are male. These stages fuse and then produce two types of zygotes. Some have thin walls only - these serve to keep the infection going in the same host. Others, though, develop thicker walls and are released into the environment to infect new hosts. There isn't a very good treatment for those that become infected except for supportive therapy (fluids, etc) until the immune system can get it under control. The complete genome of C. parvum was completed in 2004 and it is unusual among apicomplexans in that neither its mitochondria nor its plastid organelles contain DNA.
Posted by Susan Perkins at 9:57 AM