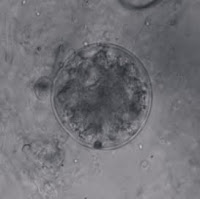 This chytrid fungus (Chytriodiomycota: Chytridiales) is the causative agent of chytridiomycosis, an emerging infectious disease of amphibians. This fungus has been implicated as the cause of amphibian declines and extinctions of more than 250 species of frogs across six continents (the widespread distribution of this disease the likely consequence of anthropogenic effects). B. dendrobatidis can infect both larval and adult amphibians. Infections in larvae cause a reduction in grazing efficiency, food intake, and survival. Infections in adults cause thickening of the skin which might interfere with osmoregulation or ion balance. This fungus has two parts of its life cycle: one part in the host and one part outside of the host (a motile zoospore stage). Recent studies have shown that B. dendrobatidis can survive for long periods of time outside of the host, increasing its ability to drive host populations extinct. Although this fungus is believed to have originated in Africa, B. dendrobatidis was first reported in North and Central America and Australia in 1998, coinciding with massive amphibian declines. However, this fungus has been around since at least 1938 (documented in museum specimens), therefore researchers are trying to determine if B. dendrobatidis is truly a novel emerging disease or a long-term endemic pathogen (where population declines are the result of changes in pathogen virulence, host susceptibility, environmental change, or a combination of these factors). What kind of disease B. dentrobatidis actually is may help to determine how to stop the rampant spread of this devastating fungus, if possible. Findings currently point to B. dendrobatidis being a novel pathogen (laboratory experiments, wave-like declines of amphibians, etc), however much more work needs to be done to be sure.

Contributed by Jessica Light.
See this paper or this one (which just came out today) for more information.
Posted by Susan Perkins at 8:28 AM