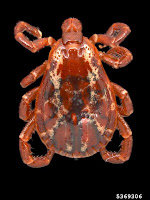 Ticks are small, blood-feeding arachnids, relatives of spiders and mites. The American dog tick, Dermacentor variabilis has three life stages: larvae (which are 6-legged not 8!), nymphs, and adults. As the ticks pass from each life stage to the next, they require a bloodmeal from a vertebrate. Larvae and nymphs will usually obtain this bloodmeal from rodents, but adults, as their name suggests will seek out larger mammals, particularly dogs, and sometimes humans. These ticks find their hosts using a behavior known as “questing”. They crawl to the top of a blade of grass or other variation and extend their front two legs until a host brushes past, at which point they grab on. The life cycle can take two years to complete, with the ticks overwintering in the soil. D. variabilis is another example of an ectoparasite that can vector other diseases, in this case, Rocky Mountain Spotted fever, tularemia, and ehrlichiosis, which are all bacterial zoonotic diseases.

Image from Insect Images (but remember that ticks are not insects!)
Posted by Susan Perkins at 9:03 AM