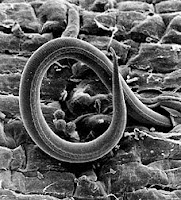 If you're having bananas on your cereal this morning, while sipping a little coffee, and dabbing your chin with a cotton napkin, feel lucky that all of those original plants survived Meloidogyne incognita, the root-knot nematode. These common pests invade the roots of over 1700 different species of plants. Infective larval worms enter into the growing parts of roots and induce a cell to undergo nuclear division without the cells dividing (cytokinesis), which results in giant "nurse" cells for the worms and produces the characteristic knots. When the worms gobble up the plant's nutrients, severe damage and death can ensue. Because of its tremendous economic importance (estimated at something like $5 billion U.S), the complete genome of this nematode was recently sequenced. What was an especially surprising was that there were 61 proteins that were involved in plant cell wall degradation - higher than ever found in another organism - and that many of them appear to have had a bacterial origin. Thus, these nematodes apparently have acquired genes that enhance their parasitism via horizontal gene transfer from bacteria.
Posted by Susan Perkins at 6:00 AM