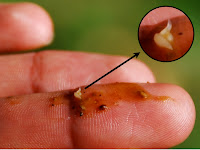 Today’s parasite is the pinworm Parapharyngodon cubensis. Species in this genus are parasites of reptiles and amphibians, with over 40 taxa known worldwide. These are characterized by a direct life cycle and fecal-oral transmission. Except for this brief transmission period, the parasite spends its entire life within and dependent on the host (usually its large intestine). P. cubensis is broadly distributed in the Caribbean and the only known non-Caribbean population is found on Bermuda in introduced populations of Caribbean anole lizards.

Like other pinworms, P. cubensis is haplodiploid. In low densities, the worms reproduce asexually, and have just one set of chromosomes (i.e., they’re haploid). Once the populations get bigger, and the parasites begin encountering one another, they have sex. Their offspring have two sets of chromosomes – one from each parent (i.e., they’re diploid, like us). This is a pretty good reproductive strategy for an otherwise lonely animal that may not encounter another of it’s kind in its lifetime.

Contributed by Bryan Falk.
Posted by Susan Perkins at 6:00 AM