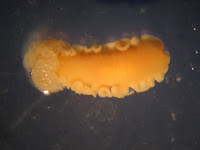 This bizarre parasite is a non-segmented flatworm that lives in the spiral intestine of deepsea chondrichthyen fish such as ratfish and chimaeras. Distantly related to tapeworms, these parasites don't have mouths or intestines - instead they attach via a unique "ruffle" structure known as the rosette, and then absorb nutrients from their host via microvilli. This whole arrangement baffled parasitologists for quite a while, exasperating them to the point of not even knowing which end of the worm was the anterior and which was the posterior! The complete life cycle of these parasites has yet to be worked out, though it's known that they produce small larvae covered in cilia.

Photo by Willi Xylander and comes from this website.
Posted by Susan Perkins at 6:00 AM