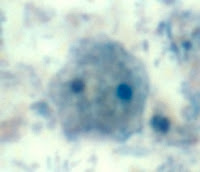 Although Dientamoeba fragilis is an extremely common parasite, many details about its biology remain to be answered. Originally taxonomically grouped with amoebas, later ultrastructural studies followed by molecular work has instead showed that it is more closely related to Trichomonas than Entamoeba. The single-celled organisms are primarily found in the large intestines of people and other animals and can produce classic symptoms of traveler's diarrhea. The name of this species comes from the fact that it typically exists in a binucleated state (as in the photo - I think it looks like a Pacman ghost). The exact mechanism of transmission of D. fragilis is still not known. Cysts have never been observed - at least in humans, though a fecal-oral route is presumed. Some theorize that pinworms (Enterobius) or other helminths act as mechanical vectors for the D. fragilis, but this has not borne out in all cases.
Posted by Susan Perkins at 6:00 AM