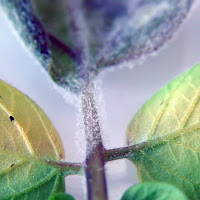 Phytophthora infestans is a potato-infecting water mold (oomycete) that travelled with tubers from America to Europe and was the causal agent of the Irish Potato Famine in the 1840s that led to massive emigration to the New World. The potato late blight disease is difficult to control even today, and is usually attempted by repeated spraying of chemicals. Although P. infestans might look like a typical fungus, it isn't one, but rather is related to brown algae, and relies on water for efficient infection. Swimming flagellated zoospores start germinating when they come into contact with host plants like potatoes, tomatoes and a few other nightshade relatives. Quickly a hyphal network grows between the cells of leaves and tubers. Hyphae produce digit-like extensions called haustoria that stick into the cells to acquire nutrients. To suppress the plants immunity, P. infestans delivers dedicated effector proteins into host cells (learn more here). At later infection stages the parasite shifts into killing mode and destroys leaves to finally produce sporangial containers filled with an army of new zoospores to start a new infection cycle. Sequencing of the pathogen’s genome revealed a huge amount of repetitive regions which enable the parasite to exquisitely adapt to new conditions.

Image and post contributed by Sebastian Schornack.
Posted by Susan Perkins at 6:00 AM