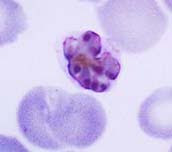 Plasmodium malariae is another of the five species of Plasmodium that cause the disease malaria in humans, but this is the one you need to worry about least. It's not because it's only found in a tiny area - to the contrary, it has an almost worldwide distribution. But, the symptoms that it produces are fairly mild and it's rarely fatal. The fevers induced from infection with P. malariae occur every three days, thus it was known as "quarten" malaria in the ancient world (the Romans did not use zero). A species originally isolated from New World monkeys known as Plasmodium brasilianum was recently found to be genetically indistinguishable from P. malariae and probably represents a shared parasite, though the order of the move is still somewhat uncertain, i.e. whether human infections in the New World have recently spilled over into monkeys or whether this is a recent zoonosis acquired by humans.
Posted by Susan Perkins at 6:00 AM