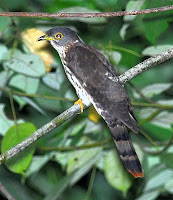 We have met other cuckoos before, birds that are known as brood parasites that usurp other birds' nests and trick them into raising their chicks instead of their own. Cuculus fugax, commonly known as Hodgson's Hawk-cuckoo, is a native of Southeast Asia that proves in a way that birds are pretty hard-wired and easy to fool. The parasitic bird lays one egg in the nest of another bird and when it hatches, it kicks any resident chicks out of the nest. And then it begs its new parents to feed it. But, the little chick is tricky - because it now only has one mouth gaping open for the parents to see, it also flashes the undersides of its wings, which have patches that look like two other chick mouths. The parents then go out and forage for three hungry chicks, bringing back enough food to feed the hungry cuckoo.
Posted by Susan Perkins at 6:00 AM