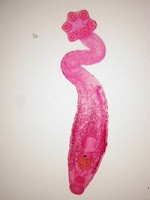 The hippopotamus is notorious for being one of (if not the most) dangerous large animals of Africa, as they are extremely aggressive and unpredictable, and are responsible for killing more people than some of the iconic predators of Africa such as lions and crocodile. However, even this fierce giant is ailed by a tiny irritant - Oculotrema hippopotami - a species from a group of ectoparasitic flatworms known as the monogeneans.

Most monogeneans live on the skin or gills of fish, however there is an unusual family of monogeneans called the polystomatids that live mostly in the bladder of frogs and turtles. O. hippopotami can be considered even more of an oddball out of a family of oddballs. Not only has it colonised a mammal, it also lives in a peculiar part of its host. As its name implies, it lives in proximity of the hippo's eye, more specifically, under the eyelids. So for all its brazen brawn and strength, the mighty hippo is not immune from being parasitised!

Photo is from this site.