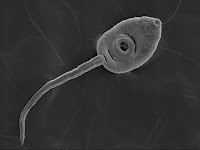 The purpose of this blog is to celebrate parasite biodiversity, but what some people might not realise is that much of parasite biodiversity might simply be hidden from sight, in more ways than one. It isn't just that parasites are hidden within the body of their free-living host, sometimes, previously unrecognised species could be right under your nose and you wouldn't know it even if you see it.

For example, take today's parasite. For quite a few years, it was thought that the Acanthoparyphium found at Otago Harbour, South Island, New Zealand consisted of a single species. It infects the marine snail Zeacumantus subcarinatus as the first host, within which it undergoes asexual replication to produce free-living larvae call cercariae which then infect the New Zealand cockle Austrovenus stutchburyi (which also happens to be the second host for another trematode, Curtuteria australis - featured on January 15). However, during some routine investigation with molecular markers, it was serendipitously discovered that what was initially thought to be a single species of trematode actually turned out to be composed of at least four different species that are morphologically indistinguishable from each other (or at least very similar), but genetically distinct. At the moment, they are provisionally known as Acanthoparyphium species A, B, C, and D. While they all utilise the same species of snail as the first host in their life-cycles, since the initial discovery, it has been found that they differ in term of the next host they infect. Whereas the encysted stages of species A were commonly found in cockles, those of species B were found to infect ragworms, and the second host of species C and D remains unknown.

Cases like this goes to show that there's more than meets to the eye with most parasites!

Photo credit: Haseeb Randhawa and Matthew Downes.
Contributed by Tommy Leung (with B for Birthday - Happy Birthday, Tommy!)
Posted by Susan Perkins at 6:00 AM