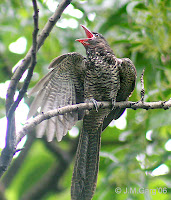 This beautiful bird, commonly known as the Asian Koel, is a brood parasite in the cuckoo family. Eudynamys scolopaceus is found in southern Asia and primarily uses crows as hosts for its young. Although the female will sometimes remove one of the host's eggs when she lays hers, unlike many other brood parasites, the Asian Koel young usually do not kill or evict their nest mates, but rather beg their host parents in calls resembling those of baby crows. Their common name comes from the calls that the adults make, though their Sanskrit name, seen in literature that is more than 4000 years old, is Anya-Vapa which translates to "that was raised by others". Thus, the Asian Koel may be the first documented brood parasite known.
Posted by Susan Perkins at 6:00 AM