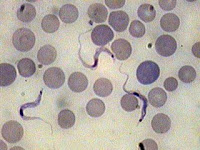 On December 25, 1643, Captain William Mynors and his crew aboard the ship the Royal Mary, sailed past a small island in the Malaysian archipelago and dubbed it "Christmas Island." More than 300 kilometers away from the nearest other piece of dry land and uninhabitated by humans or their animals until the 1890's, many of the animals and plants found here were unique to this island. These species included two endemic species of rats, Rattus macleari and Rattus nativitatis. Despite the fact that the first settlers found them to be abundant, within a very short time, i.e. by 1908, the two species had gone extinct. Why? In the early 1900's, a tropical parasitologist had noticed several Rattus macleari individuals acting sickly and he speculated that they had been infected with trypanosomes. This was nothing but a hunch for almost exactly a century at which point molecular diagnostic techniques were brought into the picture. Scientists, including some of my colleagues at the American Museum of Natural History, took rats that had been collected from Christmas Island and deposited as specimens into natural history museums, extracted DNA from them and tested them for trypanosomes. Sure enough, many of the rats collected after humans arrived on the island showed evidence for infection with the parasite, Trypanosoma lewisi. The scientists also tested three rats collected prior to any settlements and none of those tested positive. Thus, it appears that fleas bearing T. lewisi hopped off the black rats (Rattus rattus) on the ship, bit the island's endemic rats and transmitted the parasite. The naïve hosts were likely killed by these parasites and went extinct.

You can read the whole paper here. Image is from this site.
Posted by Susan Perkins at 6:00 AM