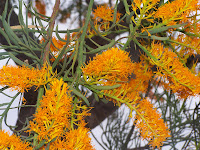 During Christmas time in Western Australia, Nuytsia floribunda begins to flower, displaying bright orange flowers and earning itself the name "Australian Christmas Tree". Despite its name, it does not resemble the typical image of a Christmas Trees from the Northern Hemisphere. In fact, N. floribunda actually more closely resembles another Christmas-themed plant - the mistletoe - for N. floribunda is also a hemiparasite. Like other parasitic plants, they have a modified root structure call a haustorium which penetrates the roots of their host plant. The haustorium of the Australian Christmas Tree is armed with sickle-like "horns" with which it to cut its way into the root segments, allowing the Christmas Tree to tap into the flow of water and other chemicals. Interestingly, unlike most other parasites, an individual Australian Christmas Tree can actually exploit multiple hosts at the same time, spreading out a network which is linked to the roots of multiple host trees. And they are certainly not discriminating about whom they network with - most species of trees are vulnerable to invasion by their haustroia, and even underground cables have been found to have the haustoria of N. floribunda attached to them!