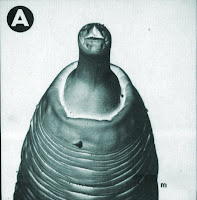 Myleusnema bicornis is a species of parasitic nematode belonging to the family Kathlaniidae which is found in the intestine of a small herbivorous freshwater fish call Pacoucine (Myleus ternetzi). This nematode has a few morphology features which are rather unusual. Firstly, while most nematodes have a relatively straightforward-looking anterior end, M. bicornis has a separate, narrow cephalic region that can be extended or retracted (see photo), superficially resembling the proboscis of acanthocephalans such as Profilicollis altmani and Echinorhynchus salmonis. Additionally, male M. bicornis worms have a pair of postcloacal horns located at the posterior end, a feature that is absent in all other species of nematode in the kathlaniid family.