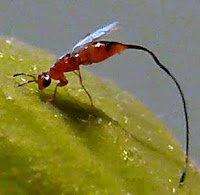 In the "We Wish You a Merry Christmas" carol, there's a line in there demanding that the host bring out some figgy pudding. But there won't be much of that going around if a wasp like Philotrypesis caricae gets involved. Figs rely upon fig wasps for pollination and the close coevolutionary relationship between figs and fig wasps is one of the best examples of an animal-plant mutualism. The wasps pollinate the fig and in return, the fig wasp is provided with a secure location and an ample supply of food to raise its larvae. However, not all fig wasps are so charitable. The "grinches" in this system are parasitic, non-pollinating fig wasps that try to receive the benefits of a fig to raise their young, without paying the "admission fee" of pollinating the fig in the first place. Philotrypesis caricae is one of many hundreds of species of non-pollinator wasps which take advantage of the fig and fig wasp mutualism. The female P. carciae has a long ovipositor that allows her to penetrate through the wall of the fig to deposit her eggs directly into its interior. Furthermore the larvae of P. caricae actually outcompete the larvae of the "honest" pollinator, in this case, Blastophaga psenes. This "grinch" might not have stolen Christmas, but it sure ruined Christmas (or every other day) for many fig wasp larvae!

Contributed by Tommy Leung, with image from this site.
Posted by Susan Perkins at 6:00 AM