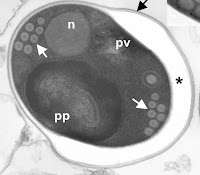 Back in July, you met Lepeophtheirus salmonis, now meet Desmozoon lepeophtherii the hyperparasite that makes a living by infecting that particular parasitic copepod. Desmozoon lepeophtherii is a microsporidian, a diverse group of unicellular parasites that are the sister group to the fungi. Microsporidians infect a wide range of animal hosts, thus it is not surprising that even a parasitic copepod is not off-limits. Interestingly, genetic analyses indicate that the closest relatives of D. lepeophtherii are microsporidian in the genus Nucleospora, which are mostly parasites of salmonids. It is possible that for some reasons, the ancestor of D. lepeophtherii opportunistically made the jump from infecting its original fish host to infecting the ectoparasites which infects the said fish.

Email ThisBlogThis!Share to TwitterShare to FacebookShare to Pinterest
Labels: hyperparasite