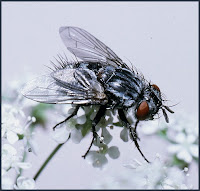 Gypsy moths are a notorious invasive species in the eastern U.S., causing massive damage to hardwood trees like oaks, aspens and apples. These moths were originally imported in the late 1860's by a biologist to try to breed disease-free silk-spinning caterpillars that then escaped and spread like crazy. (I remember being a kid when they first reached my hometown in northern New York - it was like a plague had descended on us!) In an effort to control them, a parasitoid fly, Compsilura concinnata, was introduced from Europe. Although the flies do help to some degree, they may have caused more damage than good because they also prey on native caterpillars. Part of this is because the gypsy moth is univoltine, that is it just undergoes one generation per year, but the flies are multivoltine. The flies use gypsy moth caterpillars for their first generation in the spring, but then when the gypsy moths are gone, the flies turn to other caterpillars for the rest of the warm months. The beautiful Luna Moths have been hard hit by these "control" agents.

The image is from this site and read more about the effect on luna moths here.
Posted by Susan Perkins at 6:00 AM