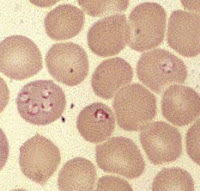 If you suddenly experience symptoms that resemble those of malaria (fever, chills and pains, etc.), but have not traveled to the tropics, but you have traveled to Long Island, Connecticut, or Rhode Island, perhaps you've acquired its relative, Babesia microti. This apicomplexan parasite also infects red blood cells and has a life cycle that is roughly similar to Plasmodium (though without liver or other exo-erythrocytcic stages), but instead of mosquitoes, this parasite uses ticks as its vectors. The normal vertebrate hosts are white-footed mice (Peromyscus leucopus). Because the same species of ticks also transmit Lyme Disease, it is not uncommon for people to become simultaneously infected by both. There seems to be an increase in the number of reported cases recently, due partly to better awareness and diagnosis, but also likely because of greater contact between ticks and people.
Posted by Susan Perkins at 6:00 AM