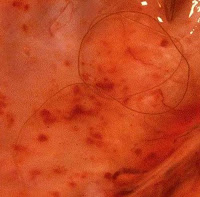 Parelaphostrongylus tenuis is a parasite of white-tailed deer that lives in the meningeal spaces of a deer's brain and is thus known as "brainworm". Female worms lay eggs that make their way to the lungs via the blood. There, the eggs hatch into first-stage larvae, get coughed up, swallowed, and then passed out. Snails or slugs then come along and are infected by the larvae, which penetrate the foot of the gastropod. Eventually, the nematode makes its way back into a deer, when they are ingested by the browsing deer. The worms penetrate the stomach, make their way to the spinal cord, and then follow this up to the brain to begin the cycle again. As far as we know, the worms don't seem to have a great effect on white-tailed deer, though I suppose they're not known for being particularly smart animals anyway. However, if the worms find themselves in other hosts such as moose, llamas, or goats, the effects can be very severe. In these hosts, the worms cause uncoordination, stumbling and aimlessness, a condition that is very often fatal.

Image comes from this site.
Posted by Susan Perkins at 6:00 AM