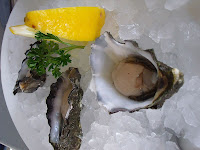 Do you enjoy seafood? Especially shellfish? Especially raw oysters? Whether you know it or not, the next time you tuck into some raw oysters, there might be a parasite which is responsible for enhancing your gastronomic experience. Usually, having parasites in your shellfish can be seriously bad news. However, apart from the squeamishness factor, the harm caused by your seafood being infected with the asexual stage of a trematode is minimal to neglible.

As we have seen in prior blog entries, the asexual stages of trematode parasites castrate their first intermediate host, utilising it to produce free-living larval stages which are released into the environment. Now if this first host happens to be oysters - which is the case for Bucephalus haimeanus, this has interesting culinary implications. In uninfected oysters, after they spawn they exhaust the all the nutrients and resources they've stored up and become almost tasteless after spawning season is over. However, because infected oysters are castrated, they stay fat and retain their flavor through out the year.

So from a gastronomic point of view, parasitised oysters are a class above their unafflicted brethen!