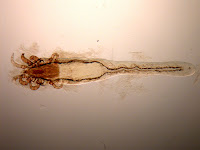 Back in 1984, a 35-year old guy started feeling a pain in his eye and went to his doctor. The doctor looked under his eyelid and saw nothing. The next day, the pain was worse so he went back and asked the doctor to examine him again. During that visit, the doctor found - and removed - a single mite of the species Orthohalarachne attenuata. Ok, weird, but not that weird, right? Wrong. Orthohalarachne attenuata is a species of mite that normally is found in the nasal passages of fur seals, sea lions, and walruses. In seals, the mites can be both prevalent (as in almost every single seal has them) and abundant (as in more than 1000 mites per seal and in a few cases in one study, more than 2000!). These incredibly high infestations can cause problems for the seal's breathing, but can also do damage in the lungs and leave the seals susceptible to other infections, too. Transmission between seals occurs by -- sneezing on each other, of course. So, how did this young guy in California get a nasal mite in his eye? Turns out that two days before his first doctor's visit, he had visited Sea World - where he stood too close to some walruses and got sneezed on.

Photo contributed by Mike Kinsella. Documentation of the human case in this paper.
Posted by Susan Perkins at 6:00 AM

Email ThisBlogThis!Share to TwitterShare to FacebookShare to Pinterest
Labels: mite