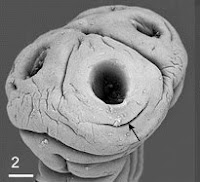 This species of tapeworm was recently described from African catfish that were collected in Ethiopia and Sudan. The complete life cycle is not currently known, but it has been speculated that they likely use copepods as their first intermediate hosts, which are then consumed by the catfish. The etymology of this species is rather amusing. The genus was also a new one - this was named after Maxwell Barson, who is a fish parasitologist from Zimbabwe. The species name here, though, is in honor of - and I quote from the original species description here - "Dominique Lafon, world-famous winemaker from Meursault, Burgundy, France, who produces one of the most inspiring white wines in the world." I wonder how Lafon feels about this?
Posted by Susan Perkins at 6:00 AM