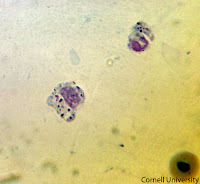 There are many reasons not to keep pet parrots. They're long-lived birds that require years, if not decades, of care. They can be messy and destructive. And, above all, many species are in danger of extinction and quelching the market for them is one helpful thing we can do. But, today's parasite is another reason. Chlamydophila psittaci is a species of bacteria that causes a very serious disease in both birds and mammals, including humans, known as psittacosis. These bacteria have a pretty unusual life cycle - they alternate between being intracellular bacteria in the lungs of their hosts and very resistant stages known as "elementary bodies." When engulfed by phagocytosis and attacked with a lysosome, the elementary bodies say "Ha!" and just begin to replicate instead - even going so far as to use some of the host cell's own organelles. Eventually they kill the host cell and become elementary bodies again, ready to reinfect this host or be spread to another one. In 1929, a major outbreak of psittacosis occurred in the U.S. The result of that was the drafting of more strict regulations concerning the trade of parrots and other pet birds but this epidemic was also partly responsible for the creation of the National Institutes of Health. You can read more about that in this article from The New Yorker that was published last year.

The image comes from this site.
Posted by Susan Perkins at 6:00 AM