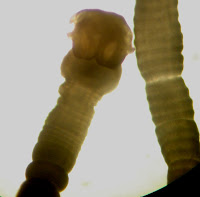 The parasite for today is a tapeworm recovered from the intestine of an Andrews' Beak Whale (Mesoplodon bowdoini). This worm belongs to the genus Tetrabothrius, and while this particular species infects beaked whales (obviously), other species of Tetrabothrius have been found in a range of dissimilar marine hosts ranging from baleen whales to fish-eating birds such as albatross and penguins. Tapeworms like Tetrabothrius often have species-specific morphology of their scolex (which is the organ they use to attach themselves to the intestinal wall), and such features can be used to distinguish different species. Larval stages of tapeworm often lack such distinguishing characteristics, making their identification practically impossible. However, the advent of molecular biology technique has enable scientists to use DNA sequences from the larval stages and match them up to those taken from adult worms, allowing their full life-cycle to be mapped out.